Hey Hey 16K – A tribute to the ZX Spectrum and the trials and tribulations of using the home microcomputers of the 80s. Originally a Flash music video, published on the B3TA web site on 4 May 2004. Now lovingly emulated and finally pixel-perfect by the magic of the Ruffle SWF emulator.

Hey Hey, 16K
What does that get you today?
You need more than that for a letter
Old Skool Ram Paks are much better. 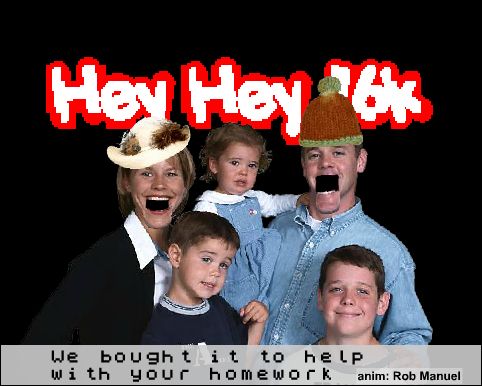 I’ve been a fan of Nina Paley’s animations for a long time, and her Sita Sings The Blues is one of my all-time favorite films. Her newest feature Seder-Masochism has now been released to the public domain, and is available for free streaming on Vimeo, as well as for full HD download on the Internet Archive.

Seder-Masochism, an animated musical, loosely follows the Passover Seder story, with events from the Book of Exodus retold by Moses, Aharon, the Angel of Death, Jesus and the director’s father. The film puts a twist on the traditional Biblical story by including a female deity perspective – the Goddess in a tragic struggle against the forces of patriarchy.

Today’s first-ever Virtual Reality (VR) / 360° interactive Doodle—created in collaboration with the Google Spotlight Stories, Google Arts & Culture, and Cinémathèque Française teams—celebrates Georges Méliès, the trailblazing French illusionist and film director on the release date of what is considered to be one of his greatest masterpieces: À la conquête du pôle (The Conquest of the Pole, 1912).

Méliès pioneered numerous technical and narrative film techniques in the early days of cinema, primarily in the use of special effects and creation of some of the earliest films of the science fiction genre.

DOUBLE KING – A film about love and regicide – Amazing and very trippy animation By Felix Colgrave.

From the ever excellent Smash TV, this is simply beautiful.

A tribute to the films of Hayao Miyazaki and the wonder he inspires.
Music: Suzanne Ciani – The First Wave: Birth Of Venus.

Weird Simpsons VHS  – A tribute to the Simpsons.

Beautiful trailer for a fictional animated film, bringing to mind the work of Hayao Miyazaki.